GSZ – Geopathic stress zones or also geoanomalous, tectonic malfunctions or ley lines are areas or spots, where changes in geophysical fields above the ground and in its surroundings occur due to natural or man-made inhomogeneity. The zones change the shape of lines of force of a magnetic field which has a negative impact on many living organisms. A tree growing on a water spring:

We divide geopathic stress zones and pathogenic zones into: 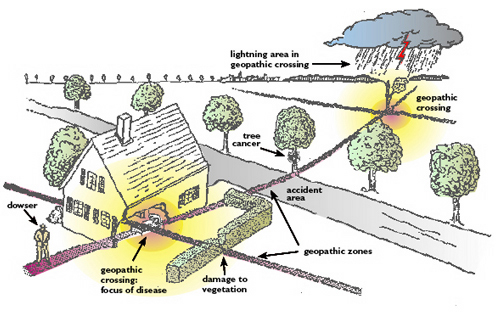 An example of zones, where there is a spring of water flowing downhill crossed by another zone.

As a rule, we can assume that geopathic stress zones gain their power before fullmoon. Also, the further away they are from the ground, the stronger they get, which endangers people who live in blocks of flats. They influence more sensitive people, mainly so called diviners, but have some impact more or less on every human being. The biggest problem lies in the localization of a zone. It is not uncommon when one diviner traces a zone on one place and another finds it on a different place. Their views may also differ in how to jam or weaken the zone. One diviner can say: use this for the zone, but another will claim quite the opposite. But in fact, many jammers can be disfunctional or even harmful. Let´s not rely on those beliefs that claim that cats tend to dwell in zones, but dogs don´t. If a dog likes its master, it will follow him everywhere and it often falls ill if his master spends most of his time in a zone. An ideal state is a bed in a tidy place. The question is, what, in fact, a tidy place is and whether there is enough space for the manipulation with furniture to change the position of such a bed.

It is essential to realize that these zones are almost everywhere and the purpose of spreading this information about zones should never be creating the atmosphere of fear. Common, weak zones do not have such a big impact on a person and one is able to defend himself against them. On the contrary, the atmosphere of fear of zones can make the problem bigger than the existence of zones itself. In case of stronger zones, it is recommendable not to underestimate the situation, but find a solution. In the past few years, the situation has gotten worse due to EMF (electromagnetic field) smog. It is produced by all electrical appliances and emitters of all kinds. GSZ and EMF smog influence each other and strenghten the harmful effects on a person. Therefore, the situation is much worse than years ago. Official authorities, producers and lobbyists deliberately, or due to the lack of information, play down the gravity of the problem.

ET can be used to protect against all kinds of geopathic stress zones and pathogenic zones:

The original purpose of the ET was mainly to provide healing, but the properties of the ball enabled its usage also for all kinds of geopathic stress zones and pathogenic zones. Users of the ET have the best experience by placing the ET nearby their beds. The ball can be placed at the bed even as a precaution!

The function of the ET differs widely from other products and systems. The ball not only influences the place itself, but simultaneously strengthens a person by creating his/her protection automatically. As it has been described in other parts of the web, the ball is an antenna for receiving and emitting of positive universal energy. Simultaneously, it also communicates with the Earth. On the one hand, the ET purifies its surroundings and creates positive environment. On the other hand, it supports your energetic system, harmonizes your chakras and strenghtens your aura.

To protect yourself against geopathic zones, the ET is to be used at the bed in this way: In some cases, it is sufficient to place the ball anywhere in your bedroom. To reach the highest efficiency, it is recommendable to place the ET on the floor very close to your bed (20 to 30 cm far from it), with its grooves upwards (the ball axis perpendicularly to the earth). The orientation of the ball does not matter too much. To enjoy the maximum efficiency for your double bed, it is recommendable to use two balls. Thus, every person has his/her own ball.

It is suitable to use the ET ball against EMF smog – electromagnetic field smog. Mainly for computers, because we tend to spend much time working with it and very close to it. Just place the ET next to the computer and yourself. Our aura gets stronger and the protection against EMF smog increases.

There is no need to use some special cleaning for the ball since it energetically purifies itself. What is suitable, is to dust it about once a week. Even ordinary use of the ET can serve as a sufficient protection against zones and similar influences. When our aura is strong enough, many problems can be dealt with more efficiently.

The biggest advantages of the ET are as follows: it can be used as a preventive measure, in case we are not sure whether there are some zones present. And it is not only the situation of our bed or appartment, which has impact on the quality of our sleep. A healthy sleeping cannot be guaranteed even by the best health mattress… What determines the quality of your sleep, is the level of our awareness, the state of our psyche, relationships and various inner and outer influences.

Sleep brings our minds to the state of relaxation and our astral body leaves our physical one. (A dream is nothing more than our pilgrimage in the astral world). Various circumstances of our sleep can make us feel either weaker or stronger. The ET helps people to enhance the quality of their sleep and helps to “tune in”. I have a plan to write an article on what really happens with a person while asleep in the future…